The ordinary young boy who was a student of Mithibhai College (Bombay) never knew his fate. For Ajay college was just a attraction to meet friends, tease girls and have fun. Life for him was without any ambitions, a person who reacted to reactions , lived the day by the minute. Being in a friend circle who could be called notorious, young Ajay was always involved in fights and brawls which often led to cop - trouble. Simultaneously, his nature to enjoy trouble got him interested to attend his father's (Veeru Devgan) fight classes early morning at Juhu beach. Subconsciously , Ajay learned each and every art in the book of stunts and fights , it may be the flair that he has is hereditary through his father , but his hard work and focus cannot be ignored. As college was coming to an end , everybody around him assumed his target career bound to be a film hero. Ajay surprised everybody. Ajay showed an interest behind the camera. He would write short stories , and in his own manner would construct his sets in his backyard and shoot , direct and edit small video films. As each day passed , Ajay grew wiser. His passion for learning brought him under the eyes of Shekhar Kapur who was visiting his father those days to discuss the action scenes of his forthcoming films. Shekhar Kapur who was impressed by this young boy invited Ajay to be his assistant director which Ajay grabbed with both hands and was with shekhar during the making of 'Dushman' and many Ad-films. Shekhar Kapur self-exile from Hindi films [ before 'Bandit Queen'] brought Ajay to assist Deepak Shivdasani who equally contributed to Ajay's growth. Ajay who was striving to be a director then faced a problem. Kuku Kohli, a family friend and his respected uncle told Ajay that he will act in his next film as a hero. Ajay could not refuse out of respect and looked at it as an opportunity to learn more, this time in front of camera. 'Phool Aur Kaante' was to be the film and the man Ajay Devgan was born . On seeing the film before release, Ajay knew that it was a good film but chuckled as so many good new film stars with a cast came and went without noticed. 'Phool Aur Kaante' was a film with a new star cast, new director, new producer and a relatively new music company. The film was a megha hit and before Ajay realized, life had changed for him. He was a super star with each and every top banner of the industry wanting to join him. 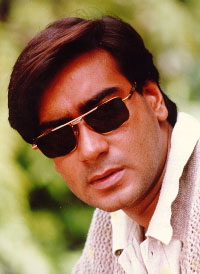